All Religions are One. 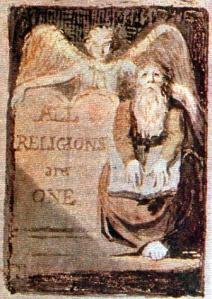 This quote is an excerpt from a William Blake tract entitled, All Religions are One, which was written in 1788. (read full text here) This work of many principles and assertions is prefaced with the phrase “The Voice of one crying in the Wilderness”, which is a quote from the Bible repeated by both the prophet Isaiah and John the Baptist as they each proclaimed the salvation of the world through the coming messiah.  Blake is equating himself with these men, by asserting that his words are prophecy, which contain a message of salvation.  In Blake’s time, this salvation would have been from the strict Enlightenment era empiricism and from the dogmatic religious tyranny that restricted the experience of what he terms, “the Poetic Genius”.

Blake’s concept of the sacred sought to find a unifying principle of religious experience, which he distilled down to an energy called, “Poetic Genius”. This reference to the “Poetic Genius” appears in many of his works as the ultimate source of prophesy, art and of the imagination, which provides mankind the impetus to express their spiritual experiences.  In Blake’s perception, because this energy defines the truth of man, then this realization of the source of spiritual experience was one that was liberating and unifying for mankind.  In this poem, Blake is postulating that this source of creative energy is the also the source of the physical form, which is the primary essence of life, rather than the empirical or religious experience. He also asserts that the entities called angels, spirits and demons throughout history are also emanations from this energy and need not be discounted as illegitimate experiences, despite the lack of empirical observation that could be applied to defining them.

William Blake was a mystic in his own time and his legacy, in the realm of spirituality, is one of radical and romantic ideals which transform traditional beliefs associated with science and religion into a more holistic and interconnected consciousness. William Blake devoted his life to finding and expressing the essence of religion, unbound from the societal structures which would impede free thought or vibrant experience. Throughout this search, he certainly displayed the behavior of one who believed in spiritual beings.

Blake’s conclusions about religion are similar to what anthropologist, E.B. Tylor found in the 20th century. Tylor defined the essence of religion, not as Poetic Genius, but as animism, which he argued was the foundation of all religious practice and complex belief systems. The difference is that E.B. Tylor approached this revelation about the source of religion with disdain for religious experience, considering it to be a primitive aspect of mankind.

On the other hand, William Blake exuberantly experienced his time and place in this world through a perspective that included a connection to the realm of the spirit and yet bore none of the restrictions of superstition or dogmatism. His philosophy was one that provided much of the energy for the Romantic era, which was a time of liberation and rebellion against tyranny in all its forms.

From Blake’s point of view, all of his life’s work was divinely inspired and this perception gave him the freedom of mind to express compassion and love for all of mankind as his equals in the realm of the Poetic Genius. As he says here in the same poem, “As all men are alike (tho’ infinitely various), So all Religions & as all similars have one source. The true Man is the source, he being the Poetic Genius.” (William Blake: The Complete Illuminated Books, 2001)

I find that astrology and tarot are the perfect tools through which artists and healers can ask deep questions about themselves and become re-invigorated to continue to evolve their inspiration and their passions. When people book a reading with me, they will find that our conversation will prompt them to clarify their intentions and to realize their highest potentials for creative self-expression.

5 thoughts on “All Religions are One.”